Some History of the Catholic Church in Cranbourne: 1973 onwards

The establishment of a new parish 1973

St Agatha’s in Cranbourne officially became an independent parish in 1973. Fr Joe O’Hagan was the official first parish priest but was then succeeded by Fr George Todd in 1974. In 1976 the St Agatha’s school opened with initial classes being held in the Cranbourne Public Hall, the Presbyterian Church Hall and the double garage of the Presbytery whilst waiting for the new school to be finished. The arrival of the Sisters of Mercy helped establish and administer the School. 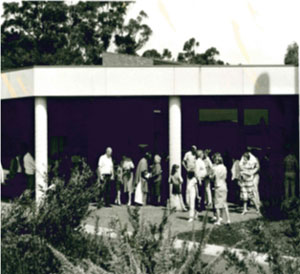 The 13th December 1981 was a blessed day in the life of St Agatha’s Parish. The new Church, made possible by the generous bequest of the late Eddie Donnelly, was blessed and opened by Bishop Eric D’Arcy, Bishop of Sale. Fr Jim McGuigan was the parish priest. The old Church on the South Gippsland Highway was decommissioned and sold; it is still standing and operates as a fast-food outlet. In writing to the people of St Agathas, Bishop Darcy wrote: “…I am deeply impressed by the exciting new church which you have built, both by it in itself, and by what it symbolizes. It struck me in two ways…first it is unmistakably modern. At no time other than the 20th century would such a building have been conceived, or attempted; all that is best and most advanced in modern architectural though and building technique seem to have been drawn on most successfully. Secondly it is unmistakably holy. Anyone, even those who are not Christian, on seeing St Agatha’s church, would know that it is a place where men and women meet God”.

In 1987, a campus of St Francis Xavier College was established in Cranbourne which was later to become St Peters College in 1994, whilst in 1989, St Therese’s primary school was opened.

Much development and rapid growth has marked Cranbourne, but none so much since the dawn of the new millennium. People from all corners of the Globe have found their way to the St Agatha’s community; a development which brings with it vibrancy and freshness in the Catholic faith. St Agatha’s is truly a multi-national parish. Part of the evidence of this is the arrival of the Sisters of the Nativity in November 2007, a religious community of Nuns from Nigeria. In 2011 the parish celebrated 150 years of Catholic presence in Cranbourne, and it appears that this will not stop any time soon. On the 8th July 2012 the creation of a new parish, St Thomas the Apostle Cranbourne East, was celebrated, and then in 2014 saw the establishment of a new primary school with the same name. The creation of the new parish will be the first in the diocese since Narre Warren was borne out of the Berwick parish in the early 1980s.